WHAT A NICE JEWISH BOY LEARNED FROM SINGING CHRISTMAS MUSIC 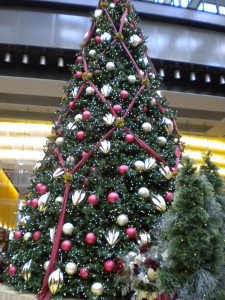 Earlier this month, I had the privilege and honor to participate in a five-performance run of “Welcome Christmas” with VocalEssence, just as I have for over a decade.  And each year, these concerts are broadcast nationally (on a one-year delay) on Public Radio.

These experiences through the years with VocalEssence have by no means been the first instances in my life of singing Christmas or, for that matter, other church music and classical sacred works.  All through high school and college, I became intimately acquainted with this repertoire.  This is as it should be for any serious student of great music – and I’m deeply gratified by what it has taught me, as a singer, composer and human being.

The first half of the “Welcome Christmas” program consisted of a single work, La Fiesta de la Posada, a joyous holiday cantata by Dave Brubeck, featuring the sort of authentic mariachi music Brubeck grew up with in the small California town of Ione.  This marvelous work alternated some passages of classical grandeur with others of festive Mexican colors, and still other moments of the warm, urbane gentle jazz improv not unreminiscent of that featured in A Charlie Brown Christmas.  And I mean this in a good way.

The second half of the program featured Christmas songs old and new, including – for the 16th consecutive season – 2 new works written especially for the occasion.  We opened with a stunning Leland Sateren adaptation of a German song fitted to a holiday text, and also sang Norman Luboff’s charming “Still Still Still,”  But perhaps the highlight of this second half was Steve Barnett’s very cool arrangement of “Go Tell It on the Mountain.”  Years ago, Philip Brunelle, founder and director of VocalEssence, specifically asked Barnett to come up with a new arrangement of this classic spiritual.  To hear Philip tell it, he felt that someone who grew up in the synagogue (as Barnett had) might have a fresh musical take on a song that had seen many rather routine renditions.  The notion is fully validated in this rendition. 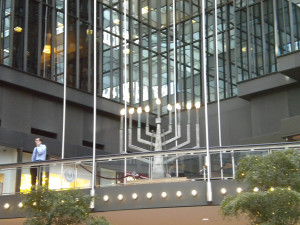 Steve Barnett was, in his youth, the long-time choral conductor (and arranger) at B’nai Emet Synagogue in Minneapolis, and has since built a reputation as composer, arranger and producer.  His musical affinities seem to lie in the realm of jazz and blues, and he has done some very interesting arrangements of Jewish texts, including a couple of disarmingly jazzy settings of the Chanukkah songs S’vivon and Mi Yimalel, which I had a chance to sing years ago on a holiday program with the Dale Warland Singers.

So why is a nice Jewish boy waxing enthusiastic about Christmas music?  Because not only is it beautiful and fun (and even inspiring) to sing even for someone like me who doesn’t subscribe to the theology of Christmas, but it’s also instructive on so many levels.

And I’ll go further out on a limb and say that the Jewish musical community can stand to learn a few things from the best Christmas music (and other sacred music), about how to sell our own message both to our own people and in an educational sense to the wider world.  I would even say there’s a desperate need for this.  Great music has the power to draw people into any cause, even if it’s just to inform.

Music as a Means.  But what does this mean, exactly?  Does it mean we have to make everything sound like church music?  Of course not.  But we could take a few cues from the much higher choral standards found the churches (at least traditionally), standards of vocal ability, sight-reading and choral art in general.  Let’s begin by developing and fostering our own choral culture to the highest standards possible.  At least two reasons for doing this come to mind.

The Choir as a Musical Instrument.  First, if our Jewish tradition dictates that we use no instruments in shul, then it stands to reason that we can ill afford to ignore the choral medium or fail to develop it to the highest calibre possible.  This is because the choir is the one means available to us of adding musical dimension, color, texture and variety to our shul music, to provide a more worthy and equal complement to the cantor.  And this will certainly help to attract more people to services on a more regular basis.

It’s worth noting that much of the Christian Orthodox tradition, like ours, has also restricted the use of instruments, and those churches have developed their choral art to a very high degree.  Let’s learn something from them.

Cultural Exchange and Mutual Understanding.  Which brings us to the second point:  As we begin to find greater parity in our Jewish choral culture with that of the churches, we might open the door to their greater understanding of and familiarity with our traditions.

While we aren’t out to convert anyone, the fact is that appallingly little about Judaism is known in wider society.  This lack of knowledge and understanding is one of the contributing factors toward prejudice, even the subconscious kind that is harbored in the most open and progressive minds.  It’s incumbent upon us to foster a greater degree of such understanding to our gentile friends, especially if we want to mitigate their fear and prejudice.

Familiarity, in this case, breeds not contempt but greater comfort and less fear of the unknown.  And of course for our part, this is a two-way street.
Join Email List