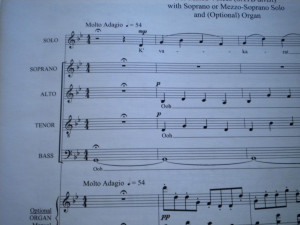 It’s tempting to think that when you’re singing in a choir or other vocal ensemble, you’re allowed to breathe whenever and wherever you want in the course of the piece you’re performing.  The truth is that you’re not – at least not officially.

Public versus Private Breathing.  By “official” I refer to the sort of breathing the audience or congregation can hear clearly, breaths that are taken together as a group or section, that also have a discernible effect on the presentation of the piece itself – call it public breathing.  The choice of where (or if) the group breathes is determined by the conductor, since breathing choices are one of the elements of interpretation – for example, to convey the music’s phrasing – and are not just about replenishing your air.  But of course, breathing is essential to that too!  No air, no sound.  And there will be frequent occasions when you’ll need to take an “unofficial” breath – often referred to as “sneaking a breath” – what we might refer to here as private breathing.

Being Sneaky.  Private here means the sort of breathing that the audience (hopefully) doesn’t notice.  The trick is to sneak such a breath at such a time and place, and in such a manner, that it can’t readily be heard and doesn’t interfere with the musical phrase or overall effect.  That is to say, the breath you take must be as quick and quiet as possible, and it must happen at a point where it is least expected – hopefully, where no other singers in the section (or at least as few as possible) are also taking such a breath.  Thus it is also commonly called staggered breathing – the art of sneaking private breaths in a coordinated fashion where everyone is sneaking them at a different time and place in the music, and in the process preserving the seamlessness and integrity of the phrase or effect.

One of the common occasions for practicing staggered breathing is in passages where the choir is called upon by the composer or arranger to provide a sustained accompaniment under a solo.  This accompaniment may be sung on a hum, an “ooh” or an “ah” vowel.  Another apropos situation might be a long or exposed unison phrase which must be perceived as unbroken, and so where quiet furtive breathing is essential.

Be Quick.  In a long, slow passage with long, slow notes, quick might mean breathing in the middle of a syllable, either in the midst of the vowel or, if absolutely necessary, dropping the consonant at the beginning of the syllable and re-entering your sound in the middle of the vowel.  If the phrase or passage is fast, with many rapidly occurring syllables, sneaking a quick breath will more likely be a matter of simply dropping one or more syllables.

Under these circumstances, never try to re-pronounce a consonant after its time.  A misplaced “S,” for example, is bound to stick out.  If you are taking a discreet breath and leaving off the S on “sake,” the rest of the group has pronounced the word complete with that S, so you would re-enter on the vowel only, without the S.

Be Quiet.  Taking a very quick breath noiselessly takes a little practice.  But the secret here is to have an open and tension-free feeling in the throat and a relaxed mouth opening, which will minimize the gasping sound and make for a quieter inhalation.  (Think of the high dive in swimming, where a minimal entrance splash is considered one of the signs of a good dive.)  This really goes for any sort of breath in singing, whether quick or slow, private or public.  Unless it’s for a specific dramatic effect (as it often is in operatic singing), loud gasping is to be avoided.

Tempo, Tempo!  Remember, however you choose to handle your private breath, you must always be able to re-enter your sound seamlessly and in perfect sync with the rest of the group, not behind or ahead of them.  This means you must take your breaths in accurate context of the tempo.  Get out and back in quickly and smoothly, so that no one but your neighbor will be any the wiser.

Safety in Numbers.  Effective staggered breathing is, of course, easier the bigger the group is.  But it can be especially useful and necessary in smaller choirs, where planning and coordination of staggering becomes even more crucial.  Theoretically, staggered breathing is feasible as soon as there are two or more voices on a part.  For any group smaller than this, consider treating the situation like solo singing, and simply take more frequent “public” breaths.

The skill of well-executed private breathing takes practice, both individually and as a group. But it is one of the fundamentals of effective choral ensemble.  The conductor/director might introduce exercises to develop this skill, especially on how to take quick breaths quietly, and on how to coordinate the staggering with one another.
Join Email List