EXERCISING THE EAR – and the MUSICIAN

Ensemble singing is about listening as much as singing. The rule of thumb is: If you can’t hear the other singers, you’re singing to loud. But what this really means is that even as you’re singing (loudly or softly), you must be acutely tuned in to what’s going on around you. Once you have attained the habit of tuning in, it becomes easier to correct mistakes almost before they happen, to avoid the misplaced consonant, the false entrance or the faulty pitch.

We have entered into the realm of musicianship – always essential, but never more so than in ensemble singing.

INTERVALS are the space difference in pitch between two notes. Practice playing, singing and recognizing intervals both alone and in a group.  It’s essential to know the names of the intervals as well as how to hear/sing them. This connection is basic to the fundamental skill of reading music.

Multi-Pronged Approach – Learn and practice each interval in different ways. Listen to and sing each one:

Purpose:  To build a fundamental skill in sight-singing.

Some intervals are easier than others. The trickiest one for nearly everyone is the tritone, which may be thought of in three different ways: 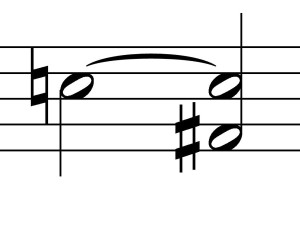 HARMONIC SHIFT EXERCISES – The group interval exercise mentioned above is one of many harmonic group singing exercises. Others should involve full harmonic chords of 3 or more parts. The leader chooses a chord (one note for each part), and has the group hold the chord. From here, all sorts of exercises can happen.

– Practice shifting the entire chord up or down by semi-tones, whole tones, other intervals.
– Change from major to minor, minor to diminished, major to augmented.
– Begin in unison/octaves, then split to a semi-tone dissonance. Move to whole tone dissonance. Evolve into 3- or 4-part dissonant chords.

Purpose: To build confidence in singing harmony; to develop a sense of tonal awareness, of skill in hearing and singing subtle harmonies and dissonances; to foster an appreciation for harmonic colors; in general, to encourage and build a sense of ensemble.

As the skill level advances, progress from standard major and minor chords to more complex chords such as:

Seventh chord built on a MINOR triad –
Same as above, but the sound will be quite different!

Augmented chord – start with a major triad and raise the 5th by a semitone. The augmented chord is really two stacked major 3rds.

Believe it or not, dynamics (loud, soft, etc.) are not easy for most ensembles to achieve effectively.  For one thing, there’s the phenomenon of thinking you’re doing too much when in fact it’s not nearly enough to “read” from the listener’s perspective. Another common (and seemingly universal) syndrome among singers is the subconscious associations of louder = faster, and softer = slower.

Gradual changes in volume are more challenging than one might think to execute in an even and consistent way. Too often we peak too early or die down prematurely. And vocally, it is a challenge to pull these off with consistent support in order not to produce strident tone in crescendo (growing louder), or lose energy and vitality of tone on diminuendo (growing softer).

Combined cresc/dim – The most common challenge here is to avoid fading too fast in the second half.

Instant or sudden changes in volume approach the realm of accent, but without the full force of an accent. They vary in degree of either the loud or the soft. In a printed score or part they are often accompanied by the word subito (sudden). Practice overdoing these – you just might discover you’re not really overdoing it, and you might not be doing enough!

Forte-piano (fp) is perhaps the most common subito change. Listen to many Mozart’s works and you’ll likely encounter this one.

Sforzando (sfz) is similar to the the forte-piano, but is rather like an accent.

Swell (<>) done with varying degrees of speed.  Try it fast, and study how this is different from an accent or forte-piano (answer: it is smoother).

Forte-piano followed by a crescendo, as well as other combinations.       Join Email List