BRIGADOON IN THE BORSCHT BELT 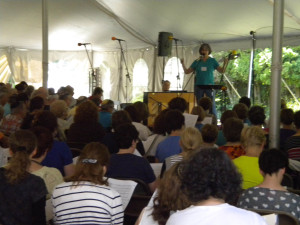 Annual Magic.  Many have aptly compared it to Brigadoon:  A beautiful place in the lower Catskills that comes alive once a year in mid-July with musical alchemy.

It is the North American Jewish Choral Festival, a program of the Zamir Choral Foundation, and this year’s 25th annual event marked an especially auspicious, and at times poignant occasion, a time to look back on the entire history of this conclave of Jewish choral music, back to its rather makeshift, extemporaneous beginnings.  In the context of the current strife in the Middle-East (no matter what one’s political position on that situation), it was all the more powerful to see Jews coming together in musical and spiritual solidarity —  to engage in, to use founder and director Matthew (Mati) Lazar’s words, “an artistic, spiritual and unifying musical catharsis.” 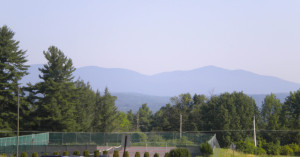 A Nice Cup of Borscht.  This year as every year since 2004, the venue for NAJCF has been the Hudson Valley Resort and Spa (formerly the Granite), near Kerhonkson, NY.  For the first eight years, the festival was held at the Concord Resort Hotel, another one of the several fabled Borscht Belt resort facilities in the general area, most of which are no more.  Such resorts have catered to city dwellers seeking a bucolic respite in these majestic surroundings.

In an average year, the North American Jewish Choral Festival draws about 500 participants, many of whom are cantors, choir directors, composers and performers.  In this 25th year, the ranks swelled to over 600.

Old Familiar Faces.  While each annual gathering features many new faces, there are many repeat performers.  This was my fourth time at NAJCF, and the long-time choir director at my congregation has managed to attend every single year since its inception.  Our cantor and cantor emeritus also were present as they have been in other years, and two friends of mine from my years in Highland Park, NJ have also been long-time regular participants.  Then there are the new friends I have made at the Festival over the years, talented souls most of whom have returned every year of my attendance.

There are performing opportunities for singers of all skill levels, and even if one isn’t a singer, it is possible to participate in the festival as a listener.  There are a variety of workshops and seminars on many Jewish musical topics. 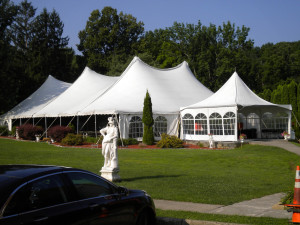 A Busy Schedule.  Each day of the festival begins a choice of three different minyanim  – Egalitarian Conservative, Reform and Orthodox) for morning prayers, followed by a large breakfast (all meals strictly kosher).  Promptly at 9:00 am, singers gather in an enormous tent on the grounds for the daily community sing, which begins with a short warm-up.  New pieces are presented and taught in a matter of 10 minutes, followed by a recorded reading of each.

Then follows the morning rehearsal for each of the five Instant Ensembles, which represent five levels of ability ranging from no sight-reading skill and perhaps limited singing ability, all the way to trained singers of advanced musicianship and fluent sight-reading.  With my extensive musical background, I have always found myself in the top level group, conducted by Mati.

After a similarly large lunch comes whatever seminar or workshop one has signed up for.  These include workshops in sight-singing, works of a featured historic composer or compositional school, special musical skills such as barbershop or small ensemble singing, early Jewish music, solo singing master class, songs of the Yom Kippur War, Holocaust Hymns, and many other subjects, more or less related to music.

Then comes the afternoon Ensemble rehearsals (all leading to a final festival performance on the final morning),

Hearing What’s Out There.  Each night of the festival (and this year, each afternoon as well) affords the opportunity to hear guest choirs and ensembles singing a variety of Jewish choral and sacred repertoire.  For this 25th Annual festival, no less than 19 guest choirs performed, ranging from intrepid amateur level groups plagued by faulty intonation and inconfident entrances to highly accomplished ensembles such as the Zamir Chorale of Boston, Kol Rinah (of Westchester) and Nashir (of Manhattan) which two choirs performed as a combined ensemble, and The Second Avenue Jewish Chorale of Miami, FL.  Specializing in Yiddish song is The Jewish People’s Philharmonic Chorus, which presented a marvelous musical history of Jews in America.

For me, perhaps the highlight of all these fine performances was the Chamber Choir of HaZamir: The International Jewish High School Choir.  These young people demonstrated exceptional vocal and musical abilities.  Their performance set, which included what was undoubtedly the most representative reading of Max Helfman’s Hashkiveinu I have ever encountered, had to be a source of great encouragement for the future to anyone (like me) hoping for raised musical and vocal standards in the Jewish choral community.

After dinner comes the evening presentation and concert, followed by an informal piano sing of old pop standards and showtunes.  At the piano for this in-the-lobby gathering is often found one Mr. Peter Sokolow, a veteran player with a vast encyclopedic knowledge of popular and show tunes harking back to the Tin Pan Alley era.

The Final Chord.  On the night of the last full day (Wednesday), we all gather in the lobby, standing before the stairway on which Mati stands to conduct us with an impromptu mass reading of Louis Lewandowski’s Halleluyah (Psalm 150), a war horse most of us know from memory.

Finally comes the big day, the culmination of our efforts – the final Thursday morning performances by each of the Instant Ensembles.  Everyone marvels at the accomplishments of his/her colleagues in just 3½ days.

All of which makes the point that this marvelous Brigadoon of Jewish music and culture, in this or any year, makes for a comprehensive experience  – of listening, of singing, of scholarship and fellowship.

Raising the Standards.  While in past years I have been a little disappointed by the lack of musical and vocal refinement in many of the choirs, and rather unhappy with the lightweight pop style of much of the repertoire, this year’s Festival seemed to signal a much higher standard in all these respects.  Yes, even this year there were occasional unfortunate experiences from my perspective.  And my abiding hope is for fully acoustic performances (presently, they are heavily miked).  But I nonetheless have come away feeling encouraged and hopeful for the future of Jewish choral and musical culture in North America.

We should all be deeply grateful for the hard work and passion of Mati Lazar and his colleagues, Rabbi Daniel Freelander and Dr. Marsha Bryan Edelman, along with the many other perennial devotees who have grown the Festival, and the burgeoning Jewish choral movement.       Join Email List